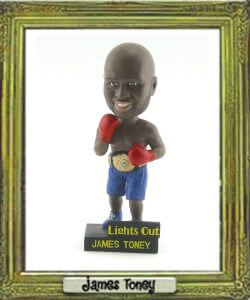 James “Lights Out” Toney is considered one of the greatest boxers out of the State of Michigan. He had an esteemed amatuer and professional career that included World Boxing titles in the middleweight (160lbs), super middleweight (168lbs) and cruiserweight (190lbs) divisions. He is considered by many to be the greatest defensive boxer of all time.

When it was time to immortalize him with a custom boxing bobblehead doll, his team contacted the custom bobblehead experts at the Bobble Factory. His bobble featured an uncanny likeness and his signature Championship belt. The bobble base also displayed his nickname, “Lights Out”.

If you are a former boxing champion or an up and comer thinking of custom bobbleheads, then call 1.888.504.3200 today.

It does have a devilish grin doesn’t it? It’s good, it’s me!

I  just got my hands on one…I couldn’t be more pleased. I’m so grateful for your hard work, the paint, packaging, bobble action and overall quality is a major upgrade, and to be able to get them on time – remarkable effort on your part.

The quality of the piece is truly awesome…Every one of our clients who has recently visited our office has left with a smile after seeing this tremendous life size bobblehead doll.

This site uses cookies. By continuing to browse the site, you are agreeing to our use of cookies.